We are excited to announce that the City of Cleveland has installed its first dedicated electric vehicle (EV) charging station for fleet vehicles!

The dedication ceremony was held at the Willard Parking Garage in September 2018, where city staff shared more details about the charging station and what it means for Cleveland.

Anand Natarajan, Energy Manager – City of Cleveland commented that the City will be purchasing 3 fleet electric vehicles in early 2019 and joining 18 cities nationwide as part of a climate commitment, stating,  “we are leading by example, not only by putting electric vehicle charging stations in, but by committing to procure electric vehicles.”

At this time, the charger is for the city’s fleet only. The City is also in the process of collaborating with local and regional partners to initiate a detailed charging infrastructure analysis for the region, with the intention of getting more publicly available charging stations installed in the next few years. 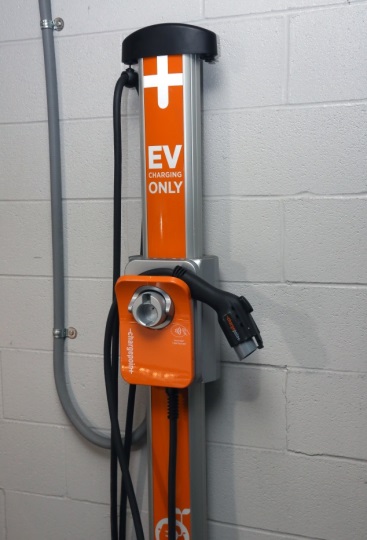 The new EV charger is considered a Level 2 charger (208/240 V) with the ability to charge vehicles more quickly than traditional 110 V power outlets.  Level 2 charging stations can provide a range of approximately 80 miles in 4 hours, compared to 18 hours it would take to provide the same range with a traditional 110v outlet. Fleet vehicle users with no prior access to wall outlets, and especially ones that have longer or multiple daily trips, are ideal candidates for using such a station.

This EV charging station is also equipped with networking, metering and data sharing capabilities that would allow the City to analyze usage patterns towards plans for future expansion.

The charging process is simple and user friendly.  Users simply remove the adapter, scan a dedicated fleet charging card and plug it in to their vehicle.

As part of the ceremony, Chief Darnell Brown, Cleveland’s Chief Operating Officer, charged an operational airport electric vehicle and remarked at the ease of the charging process, and added “You can’t put it in the wrong way!” 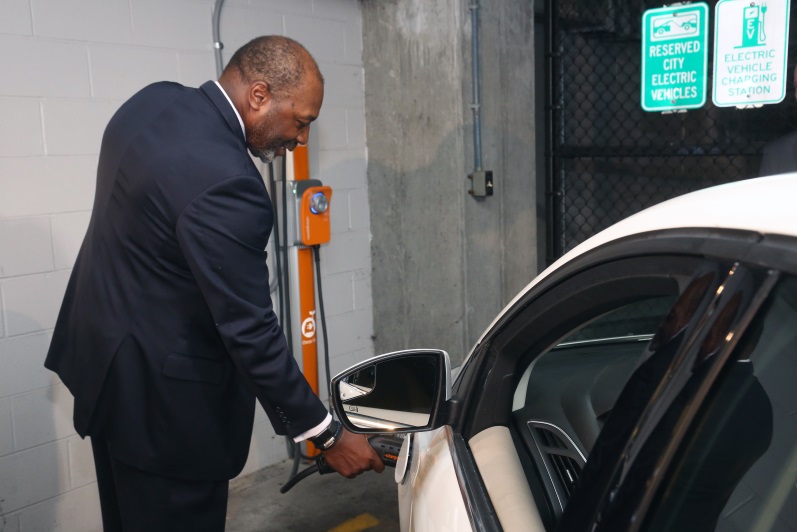 Complete footage of the ceremony from TV20 is available here.