2017- The Year of Vibrant Green Space

Vibrant green space can be defined as an accessible and active public space that benefits all and connects people to place, nature, and one another. Vibrant green space improves the quality of place and quality of life for Cleveland’s residents, while also serving as a main driver in economic prosperity. During the Celebration Year our mission was to elevate the conversation around green space as a regional asset, forge collaborations among partners, spark ideas and celebrate our accomplishments.

See below for 17 key initiatives and projects that occurred around green space in 2017.

1. On behalf of the Cleveland Tree Coalition, Mayor Jackson announced the City’s tree canopy goal to grow the City’s canopy from 19 to 30 percent by 2040. The Coalition will plant more than 50,000 trees in Cleveland by 2020. The City of Cleveland commits to planting and maintaining 5,000 of those

2. As part of ReForest Slavic Village, community members planted trees at an Earth Day event at the Boys and Girls Club. 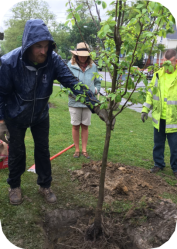 and Western Reserve Land Conservancy, has reached out to 439 individuals and celebrates 130 graduates. More than 1,000 trees have been planted, established and maintained across Greater Cleveland through this course.

5. Western Reserve Land Conservancy partnered with a number of community and corporate organizations, including block clubs in Mt. Pleasant and Woodland Hills, to take ownership of lots in their neighborhoods, to transform vacant parcels into productive green spaces and plant robust trees throughout the city.

7. Cleveland Clinic planted 134 trees across its main campus property in 2017, after planting 850 in The Clinic also rolled out a program to give caregivers free trees to plant on their personal property and 500 trees were distributed between Arbor Day and September.

8. The City of Cleveland completed a parks assessment for over 100 parks in the City that will be used for long-term planning for each site.

9.Cleveland Metroparks celebrated its 100th year anniversary with hundreds of programs offered at its 18 reservations.

10. Cleveland Hopkins International Airport unveiled two green (or vegetated) roofs with the help of a grant from the U.S. EPA.

11. Significant progress was made on Irishtown Bend, the Nord Family Greenway, the towpath, 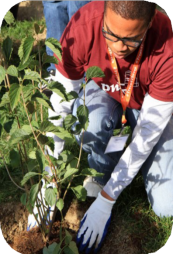 and more transformative projects. Taken all together, 2017 could be considered a “tipping point” for green space in Cleveland.

12.Through the leadership of Cleveland Metroparks, The Trust for Public Land, LAND studio, and the City of Cleveland, the second phase of the Cleveland Foundation Centennial Lake Link Trail opened in the summer of 2017. With its completion, the Flats trail network is one step closer to connecting the Towpath Trail with the Lake Erie Shoreline and Wendy Park.

14. Climate-Smart Cities™ GIS based model has been created by The Trust for Public Land for the City of Working with leaders from across the city, the program provides an analysis to help the city meet climate challenges by informing how multi-benefit green infrastructure solutions can integrate with park and infrastructure investments with a focus on equity and public health.

15. City of Cleveland’s Park Score® ranking amongst the top 100 cities in the U.S. has improved in 2017 over the 2016 Trust for Public Land rankings. The City scored high in park spending per capita and number of amenities in parks, and provides a park within a ten minute walk of 80% of residents. 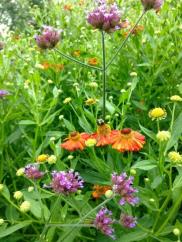 16. GardenWalk Cleveland, a free, self-guided tour of private and community gardens in Cleveland neighborhoods, was back again in 2017 and showed over 150 gardens on the tour in four neighborhoods: Detroit-Shoreway, North Collinwood, Slavic Village and West Park.