Most of us have peroxide in our homes, right? We typically reach for it when we get cuts or scrapes, but did you know it does so much more? Hydrogen peroxide (H2O2) is an excellent disinfectant, often used in hospital settings to sanitize surfaces and bedding. It can be used all around your home from kitchen to bathroom, laundry room to your dog’s bed! It can even help your houseplants! 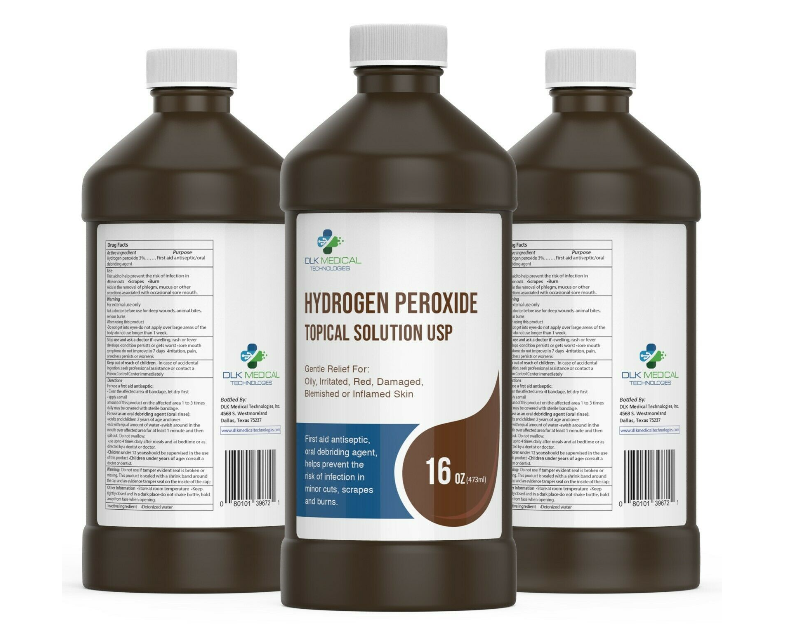 Cleaning with hydrogen peroxide has several advantages. The most important one is that it is safe to clean with since it is a non-toxic substance – it is essentially water with extra oxygen H2O2. It is not harmful to the environment, it won’t create pollution in soil or water, yet it is a strong disinfectant. It’s also kinder to many surfaces, fabrics, and your hands than chlorine bleach. Read on to learn where and how you can safely use hydrogen peroxide to disinfect your home.

Hydrogen peroxide is regularly used for sterilizing medical equipment and surfaces and is favored as a disinfectant over bleach because it eventually degrades safely into a non-toxic mix of water and oxygen. It is active against a wide range of microorganisms, including bacteria, yeasts, fungi, viruses, and spores. According to the CDC, household (3%) hydrogen peroxide is effective in deactivating rhinovirus, the virus that causes the common cold, within six to eight minutes of exposure. Rhinovirus is more difficult to destroy than coronaviruses, so hydrogen peroxide should be able to break down the coronavirus in less time. Research has also found it to be effective in disinfecting fabrics used in hospitals such as bedsheets and surgical equipment, so it makes sense that it can be a useful disinfectant for your home as well.

Thankfully, hydrogen peroxide cleans and disinfects multiple surfaces all on its own so you don’t have to mix it with anything. You can use it to disinfect your common touchpoints like door handles, light switches, keyboards, phones, and remote controls. Allow a “dwell time” of about five minutes of contact on a surface to kill bacteria, fungi, and viruses in the home.

Keep peroxide in the dark bottle it comes in, or a dark-colored spray bottle kept safely in a closet or cabinet. Hydrogen peroxide is light-sensitive and its potency is reduced if not stored properly, eventually degrading into water and oxygen (the chemical formula for peroxide is H2O2, whereas water is H2O). Here are some ways to safely use peroxide in your home:

Surfaces That Should Not Be Cleaned With Hydrogen Peroxide

Because of hydrogen peroxide's chemical qualities, there are some surfaces and materials that will be damaged with its use, such as your countertops. If they are made of marble or granite, using hydrogen peroxide once in a while is fine but not recommended for daily use because it can break down the finish. Additionally, it does have bleaching agents and can cause some discoloration. Test it on a discrete area first if you have a colored surface.

Do not use hydrogen peroxide on anything made of:

Just like with vinegar, you can use it full strength or dilute it in half with water. You may want to check a small area for color fading before using peroxide full strength since it is also an effective substitute for bleach. For thorough disinfecting around the home, spray or wipe your surfaces and leave wet for at least five minutes. And it’s great for getting into those hard to reach places, like between the stove and counter. Don’t worry about trying to wipe up in there – hydrogen peroxide safely breaks down into water and oxygen: H2O2 à H2O + O

So, next time you are looking for an alternative for those heavily scented, chemical-laden disinfectants, look no further than that little brown bottle that is sure to be somewhere in your home.