70 Miles of Bikeway in 4 Years

The City of Cleveland announced today a new Bikeway Implementation Plan designed to increase the number of bikeway miles by 250% by the end of 2017.

The Bikeway Implementation Plan builds on the existing bike infrastructure in the City and leverages the city’s five year capital improvement program (CIP) to accomplish this significant increase while adding minimal cost to the street projects.

The overall goal of the City’s bike plan is to provide cycling amenities in every Cleveland neighborhood, whether for transportation or recreational use. This plan supports Mayor Frank G. Jackson’s vision for Sustainable Cleveland 2019 and Healthy Cleveland, both of which encourage active living, quality of life and thriving neighborhoods.

“I am excited that we will be connecting every neighborhood to a bikeway network,” said the City of Cleveland’s Chief of Sustainability Jenita McGowan. “We have seen a 200% increase in the number of cyclists in the city since 2007 and this plan will help meet the new demands for bike infrastructure.” 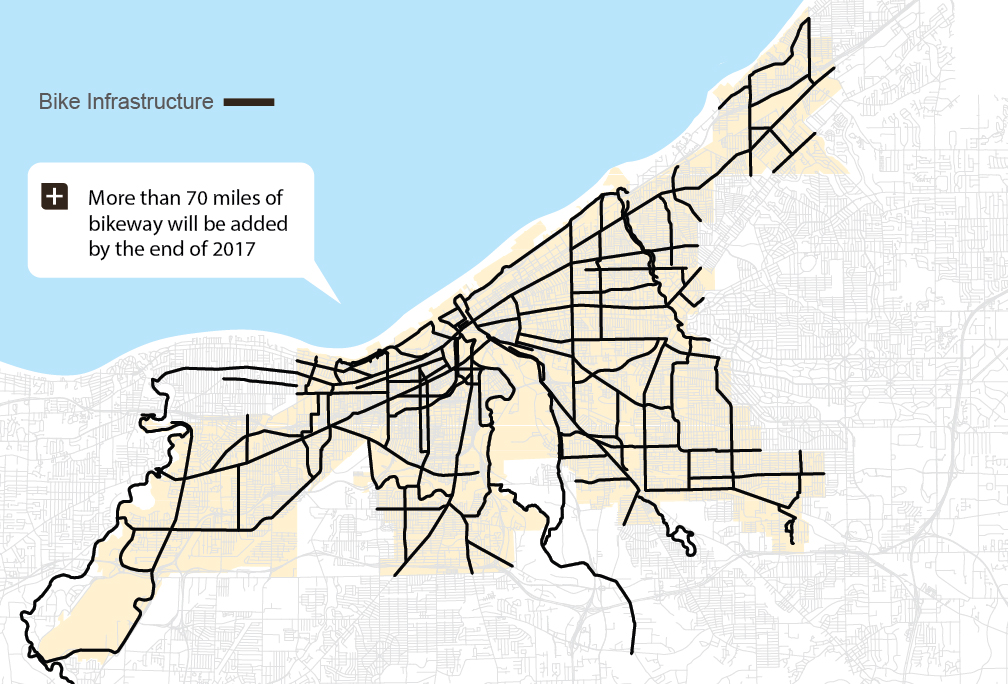 “As the number of people riding bikes, either by choice or necessity, continues to grow across Cleveland it is important to balance the needs of all users,” said Executive Director of Bike Cleveland, Jacob VanSickle.  “This plan is exciting because it prioritizes a network of connected bikeways across the city of Cleveland.” “We look forward to working with the City of Cleveland and residents on identifying which types of bicycle facilities are installed on the priority routes.”

The new bikeway miles could include sharrows, dedicated bike lanes, trails and signage, depending on the overall need and design of road being improved through the CIP. Some streets may be resurfacing projects while others may be complete reconstructions.  Either way, the cost of the signage, paint for striping or other cycling improvements will be built in to the projects. The 2014 CIP is currently under final review and will likely be released in early February. Funding for capital improvement projects comes from general obligation bonds and various state and federal funding sources.

In addition to the streets that will be a part of the CIP, the City of Cleveland has identified an additional 82.5 miles of roadway that could be eligible for cycling amenities, based on road conditions and traffic patterns.  The city will include approximately $1 million in the CIP for thermoplastic paint to re-stripe these streets. This means that by the end of 2018, the city could have 200 miles of bikeway network. These roads will be prioritized based on making key connections to the Bikeway Implementation Plan.

“The fact that we are making the inclusion of bicycle infrastructure more systematic means that we will be able to create a functional bikeway network within a few years and people will be able to see progress happening,” said McGowan.

The final Bikeway Network Plan for the City of Cleveland will be introduced to the public on Sunday, January 19, at the annual “Bike Cleveland” members meeting.