41 Buildings Owners are Doing What?!

Building owners, representing 40,000,000 square feet of commercial building space in downtown and University Circle, have committed to reducing water, energy and transportation emissions 50% by the year 2030. If they achieve their goals, Cleveland will have some of the most sustainable buildings in the nation. And fortunately, the Cleveland 2030 District is here to help.

The Cleveland 2030 District is a non-profit, private-public collaborative with the goal of engaging progressive property owners and managers to create a dramatically high performance building district in the downtown and University Circle areas. 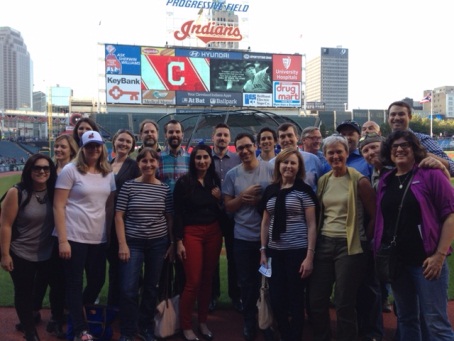 Let’s go Way Back: The Cleveland 2030 District (C2030D) began as a working group of the City of Cleveland’s Sustainable Cleveland 2019 Summit in 2010. The group was tasked with finding a way to reduce energy use in commercial buildings, one of the largest energy users in the U.S. As they researched, they found Architecture 2030, an organization that created a challenge for metropolitan cities to form Districts that focus on commercial buildings. The challenge calls for a reduction of their energy and water use as well as CO2 emissions from transportation by 50% by the year 2030. Seattle had formed the first 2030 District and Cleveland soon followed, establishing the second District which helped to create a movement which now includes 12 Districts across North America with several more emerging. 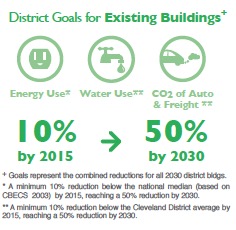 Top Performing Properties: C2030D has 41 property owners and managers who have committed to the challenge, representing 169 buildings and over 40 million square feet of commercial property. That’s about 36% of commercial buildings in downtown and University Circle combined. By using Energy Star Portfolio Manager as a management tool, C2030D provides reports that help property owners and managers understand their building’s performance.

District properties reporting with Portfolio Manager have reduced their energy use by 24%. In its first progress report published recently, C2030D reported that it has saved an average of 367,665,725 kBTUs per year which is the equivalent of removing the total energy use of almost 3,000 single family homes. Downtown offices scored well with a combined average Energy Star score of 77. Energy Star scores buildings on a scale of 1-100 with 50 representing the median. A score of 75 or higher represents a top performer.

Water and Transportation: While the focus to date has been on energy, the District has been working with the Cleveland Water Department to create a water baseline. Water management and conservation will be a focus in 2016. We also worked with several local agencies including NOACA and GCRTA and have created a transportation baseline for the District. This is perfect timing to support the City of Cleveland’s celebration year of Sustainable Transportation in 2016. C2030D will collaborate with the City and participate in the celebration year committee to focus on reducing emissions from transportation and encourage public and alternative transportation.

Get Involved: There are a number of benefits to participating in the District. We provide a number of educational and networking events and collaborate with many other organizations to be a resource for building owners, managers and tenants. C2030D has a number of Professional Partners who offer their services to participating properties in order to help them create a roadmap and implement projects to realize their efficiency goals and reduce operating costs. Additionally, Community Partners, such as the City of Cleveland, support the District’s efforts and create a network of organizations working to create a Green City on a Blue Lake.