We announced ten winners of the 2015 Sustainable Cleveland Awards. Nominees were assessed in three main areas:

Winners were announced in the following categories: Individuals, Institutions & Government, Business, and Non-Profit.

The award plaques were produced by Rust Belt Reclamation are from salvaged southern yellow pine  from a former retail building in the Central Neighborhood of Cleveland.

Gene Matthews: Gene served as Case Western’s Director of Facilities for 17 years and retired last month. Gene came to Case from Oberlin College where he rose from electrician to facilities director. 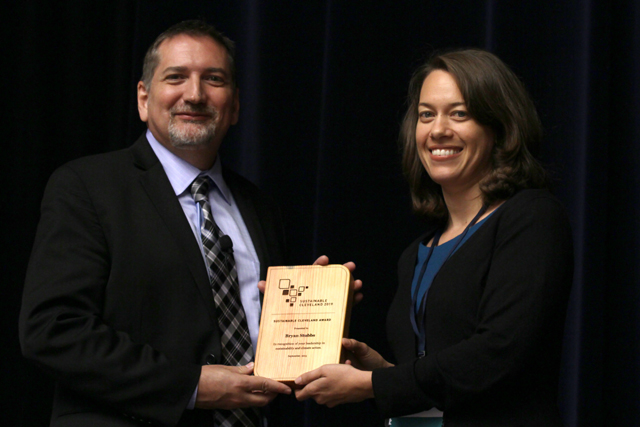 Bryan Stubbs received an individual award for his work at the Cleveland Water Alliance.

Bryan Stubbs: Since his election as the Executive Director of the Cleveland Water Alliance, Bryan has literally put Cleveland on the map in terms of water-related economic development.  In just one year, the CWA has become recognized as a thought leader in this field.  His work to connect industry with higher education and the public sector is unprecedented. 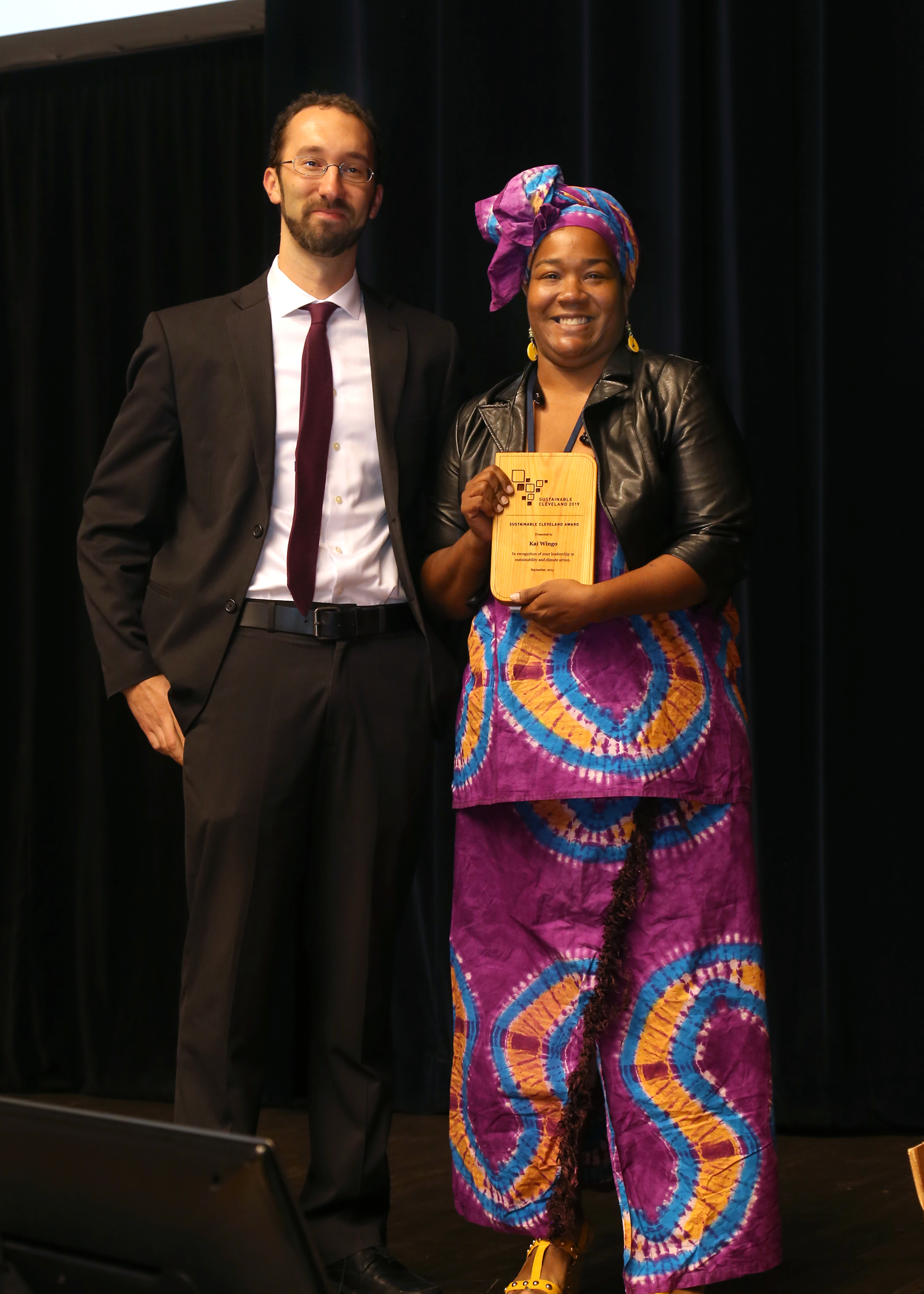 Kai Wingo received an award for her work in local foods

Kai Wingo: Kai Wingo has established Kultured Mushrooms Farm in the Buckeye neighborhood, near Shaker Square. Her dedication to rehabbing a vacant lot into a productive piece of land that also serves her community is incredibly inspiring. As the nomination says, “I believe mushrooms can help change the world, and I’ve seen them transform lives because of Kai Wingo.

Faced with the challenges of aging equipment, rising operational costs, changing environmental regulations and increasing energy demands, the Sewer District began construction of the $170 million Renewable Energy Facility (REF) in 2009.  This facility began operation in 2014 and features many environmentally-friendly practices, leading to an estimated reduction in greenhouse gas emissions of more than 28,000 metric tons.

1.Placement of bottleless drinking water systems to business and industry in the Cleveland area, replacing 5 gallon coolers and small bottles of water.  Pure Water has installed over 2,000 bottleless water purifiers, eliminating the use of approximately 400,000 5-gallon jugs and 350,000 individual water bottles.

2.Large scale sponsorship of community events to eliminate plastic and waste, including EarthFest, Gay Games, Cleveland World Festival, 4 Miles 4 Water. Through these sponsorships, they eliminated the use of approximately 30,000 disposable water bottles. 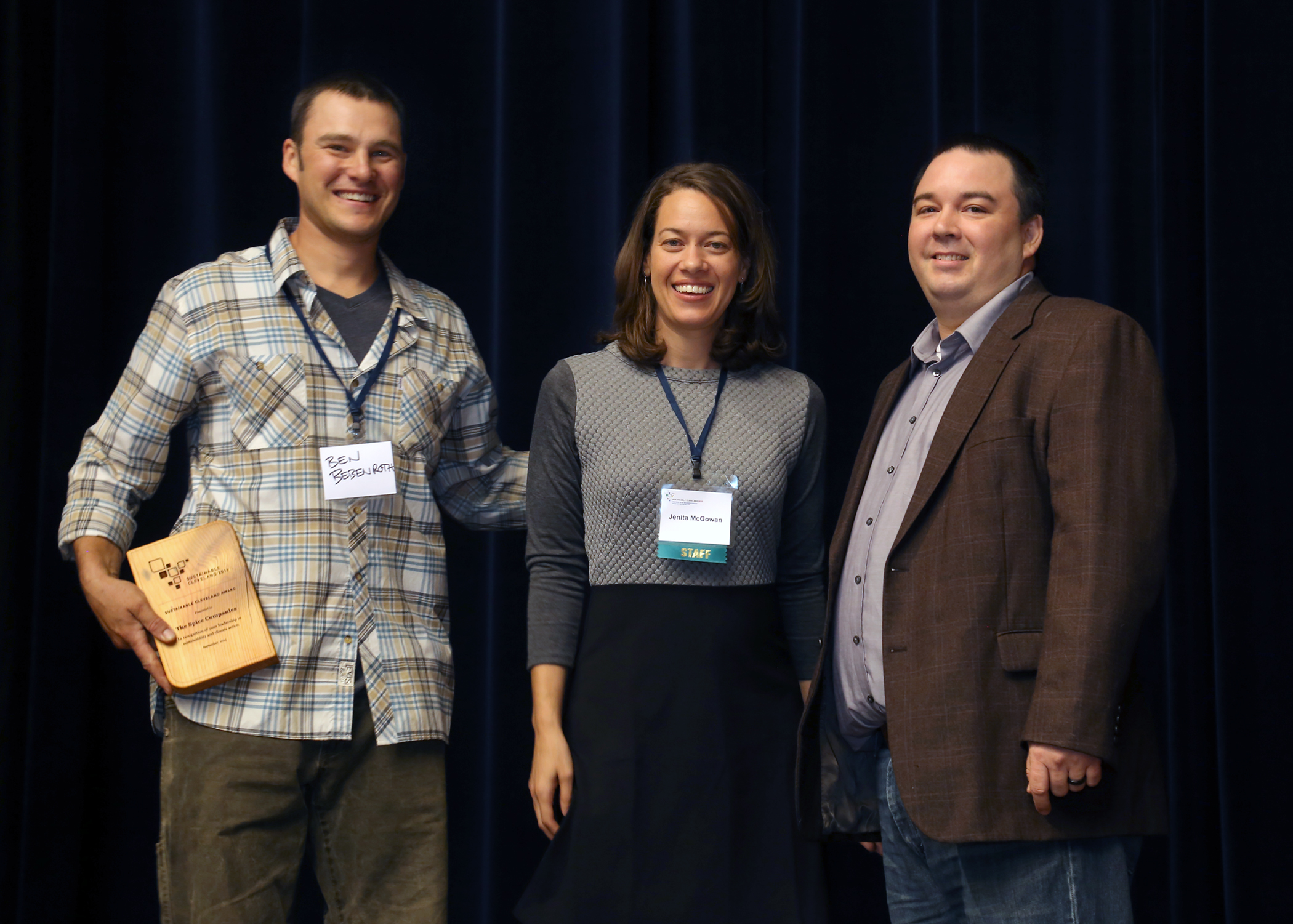 The Spice Companies: The Spice Companies are working together to capture food waste before it goes to the landfill by utilizing it at as livestock feed. This spring Spice Acres was awarded a grant from the Sustainable Agriculture Research and Education program (SARE), which is a nationwide grant and education program, to advance sustainable innovation to American agriculture. The idea…  “Let Pigs Eat Waste”.

Spice Acres will collect local restaurant non-meat food waste within a 150-mile radius to supplement its pig feed. They are reducing restaurant landfill waste and reducing pig feed costs, as well as creating a replicable food collection method that can be shared with other area farmers. They are removing approximately 200 lbs. per week that would otherwise go to the landfill.

Horseshoe Casino: The Horseshoe Casino Cleveland implemented an organic waste recycling program in April 2015 that takes all food scraps and leftovers generated by the casino and helps convert it to clean energy. Using Grind2Energy technology, the program has been even more successful than originally predicted, saving the casino approximately $5,000/month. Horseshoe has transformed about 120,000 pounds of food scraps into clean energy at the Collinwood BioEnergy site. All of this waste would have gone into a landfill in Elyria. As a result, Horseshoe Casino Cleveland now recycles 90% of all of its waste. This has made Horseshoe Cleveland the leading waste recycler throughout the Caesars Entertainment company – by far.

Cleveland Public Theatre: Cleveland Public Theatre’s Performing Water series was a season-long performing arts series that produced six original plays inspired by the theme of water, in response to the City’s Year of Clean Water. The series was created to re-connect people in a meaningful way to Water, while commemorating the recovery of Cleveland waterways and honoring NEO’s water assets. CPT engaged over 300 youth through the theatre’s Brick City and STEP education programs. Art, especially theatre, transforms both the maker and the observer. In addition to CPT’s onstage efforts, the staff embarked on a waste reduction plan, phasing out the sale of plastic water bottles at concessions and initiating composting in the main venue. 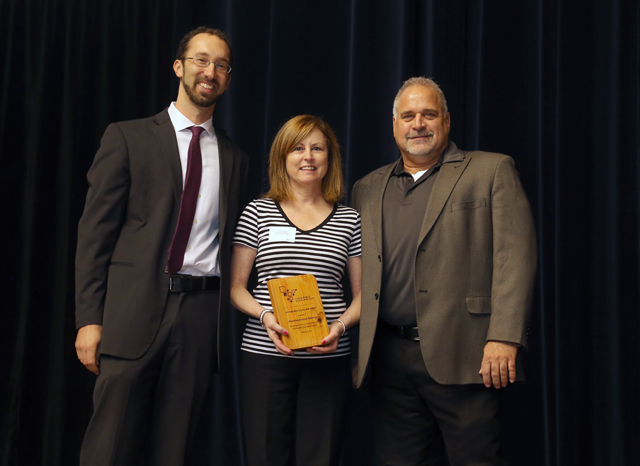 Cynthia Cicigoi and Don Rerko of the Cleveland 2030 District receive their award.

Cleveland 2030 District: Cleveland 2030 District is a unique public/private/non-profit collaboration with the goal of creating high performance building districts.  Cleveland 2030 actually started as a working group, beginning at the 2010 Annual Summit.  The working group was tasked with looking at ways commercial buildings in the downtown area could reduce their energy consumption. In the downtown and University Circle areas, Cleveland 2030 has engaged 38 Property Owners and Managers committed to significantly reducing their energy use, water use, and emissions from transportation by 2030. Over 150 buildings are participating, representing 31 million square feet of commercial building space. Finally, 16 local Professional Partners help these properties succeed in achieving their goals.